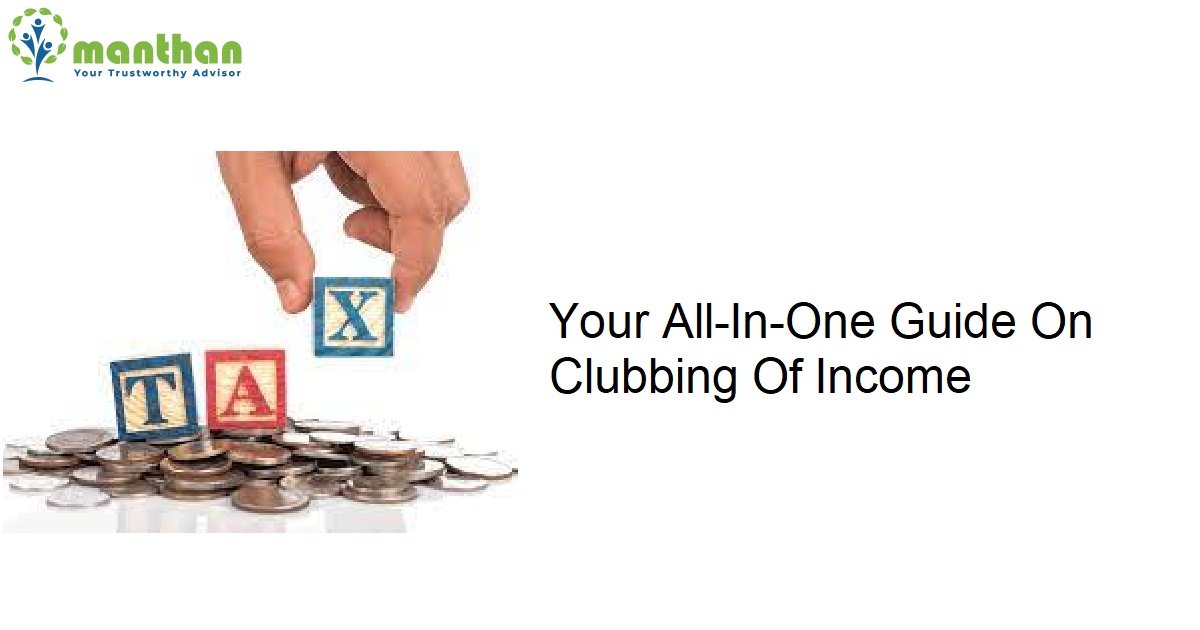 India has a progressive system of Direct Taxation. Which means that the tax liability increases as the income of the assessed increase.

In order to check and curb these tax avoidance and tax evasion activities, long back the concept of “Clubbing of Income” was introduced in Income tax Act, 1961covered by Sections 60 to 64 of the IT Act.

In this blog, we will discuss the concept and rules of Clubbing of Income under I-T Act.

Concept of Clubbing of Income

The basic rule of income tax is that a person is taxed in respect of the total income earned by him only. However, under certain circumstances some other person’s income is clubbed with income of taxpayer, which we are going to discuss in this blog. The main purpose of clubbing of income is avoidance of tax evasion.

Rules of Clubbing of income

Now if we see both the cases independently, there is NIL tax liability to be paid by A as well as by his wife.

In order to minimize such practice of diversion of income into one’s spouse or Children’s name, the concept of clubbing of income was introduced in Income tax Act, 1961.

People make such transfers in order to avoid tax liability occurring from such assets like rental income from a house property.

‘A’ owns a shop and earns rental income of Rs. 1 Lakh p.a. from that shop annually. In order to save tax, ‘A’ transfers the ownership of that shop to his wife ‘B’ with a clause in agreement that ‘B’ ownership of the said shop will be transferred back to ‘A’ after the expiry of 2 years. Such transfer shall amount to revocable transfer under section 61 of the IT Act, 1961 and all the income like rental income from such shop shall be clubbed in the total taxable income of ‘A’.

“Transfer irrevocable for a specified period” is defined under Section 62 of the I-T act.  this provision provides the exception to the provisions of Section 61 stating that it shall not apply to any income arising to any person by virtue of a transfer in following two cases:

However, The above mentioned case is applicable only when the transferor has “No Direct or Indirect Benefit” from such income in any case.

Section 63 of the IT Act, defines “Transfer” and “Revocable Transfer”, which is as under:

Section 64- “Income of individual to club with income of spouse, minor child, etc.”

The provisions of this section defines in detail the circumstances where income of spouse, minor child, etc. of individual is to be included in income of that individual.

Let’s discuss in brief about such circumstances where income of spouse, minor child, etc. of individual is to be included in income of that individual

When an Individual’s spouse receives income in the form of remuneration irrespective of its nomenclature like Salary, fee, commission, from a concern in which that individual has a substantial interest then such income, shall be clubbed together in the hands of that Spouse whose total income (excluding such income which is being clubbed) is greater than other spouse.

However, such income shall not be clubbed together when it is earned out of the technical, professional knowledge, qualifications or experience of the spouse of that Individual who has substantial interest in the concern from where such remuneration is earned.

When an individual directly or indirectly transfers the ownership of the asset to his spouse without any adequate consideration, then the income arising out of such asset shall be clubbed with the income of that individual.

Nonetheless, the above mentioned provisions are not applicable, in following cases : –

Like above provisions, when any asset is transferred to the son’s wife without any adequate or proper consideration then in such case also the income arising out of such asset shall be taxed in the hands of transferor.

When an individual trasfers asset either directly or indirectly to any person or AOP without any adequate consideration for the benefit of either his spouse or his son’s wife, in such case also the income arising out of such asset shall be taxed in the hands of such individual.

Section 64 (1A) – Circumstances for Clubbing of Income of Minor Child

A ‘Minor’ is a person whose age is less than 18 years in a relevant financial year for Income Tax purposes.

As per the provisions of Income tax Act, the minor is not liable to pay Income tax. Any income earned by a minor child shall be clubbed with the income of either of his parents for tax purposes, subject to prescribed conditions.

Let’s try to understand it with illustration

‘A’ opens “Fixed deposit in the name of his minor child. Thereafter, the interest income earned on such fixed deposits shall be included in income of “A’s” total income.

There are certain exceptions to this rule of Clubbing of Income of Minor Child. The same is discussed as under:-

Furthermore, the as per the provisions section 10(32) of the Act deduction of Rs 1500/- is allowed to be deducted from income of that parent in whose income, minor’s income is clubbed.

The Section 64(2)of the IT Act states that when an individual who is a member of HUF transfers his personal assets to the HUF without adequate consideration then the income arising out of such asset shall be taxed in the hands of such individual.

Furthermore,  when the said converted property/asset has been the subject matter of a partition among the members of HUF then in such case the income derived from such converted property as is received by the spouse on partition shall be deemed to arise to the spouse from assets transferred indirectly by the individual to the spouse and the provisions of section 64(1) shall, so far as may be, apply accordingly.

By reading above blog we have understood the concept and circumstances where income of some other person is required to be clubbed with some other person’s income. We are also aware of the fact that now a days the Income Tax department tracks almost every transactions entered into by any individual. Therefore, to avoid any tax evasion either purposefully or by mistake, it is better to club above discussed or like income with the income of individual by following provisions of section 64 of the IT Act.

New e-filing portal: Here’s how it would benefit income-tax payers

No Income Tax filing required for senior citizens if they fulfil these conditions. Details here