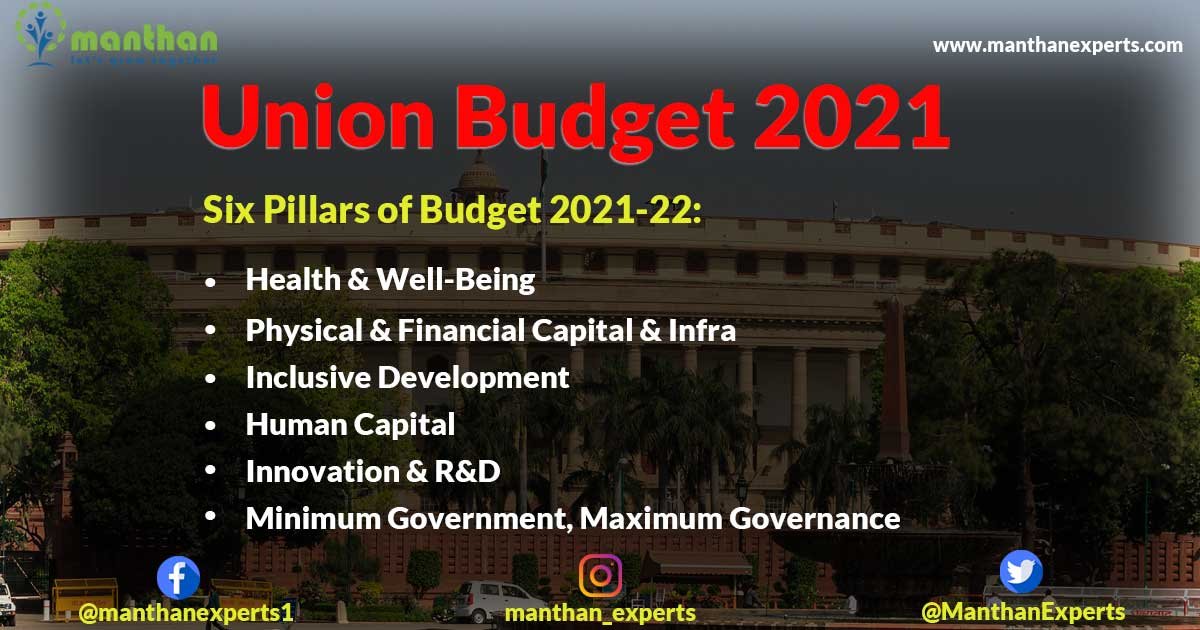 On 1st February 2021, Nirmala Sitharaman, Finance Minister of India presented first Digital budget of India, (Budget – 2021). In this Budget, Major importance is given to Healthcare and Infra Sectors. Few upcoming Disinvestments is also one of the substantial announcement made in this Budget, which includes disinvestment of 2 public sector Banks and IPO of LIC (Life Insurance Corporation)

No Change in Income tax Slab but few reliefs for seniors, small taxpayers

Direct taxes are same as before as no changes has been made in Income tax slab etc. However, the government has offered few relief which are discussed as under:

Finance Minister, Nirmala Sitharaman announced that the PM Atmanirbhar Swasth Bharat Yojana will be launched with an outlay of 64,180 crore over 6 years. It will boost National Center for Disease Control.

The allocation to healthcare in this budget has been increased substantially. The total outlay for health and wellbeing is Rs 2,23,246 Crore, which is 137% rise from previous budget.

Government also announced that amount of Rs 35,000 Crore has been budgeted for COVID-19 vaccination expenditure.

There is a hope to get to back to fiscal consolidation path by Financial Year 26.

Fiscal deficit will reach below 4.5% by Financial Year 26.

According to Budget documents, Government aims to get Rs 1.75 lakh crore through divestments in 2021-22.

In FY21, it planned to raise Rs 2.1 lakh crore through divestments, falling short.

The Government has announced plans to privatize 2 PSU banks and one general insurance company in FY22.

Government plans to complete the divestments of BPCL, CONCOR and SCI in 2021-22.

It is announced in budget that government will borrow Rs 80,000 Crore in the remaining two months to meet FY21 expenditure.

It is projected to borrow about Rs 12 lakh crore in FY22.

Rs 44,000 Crore under capital expenditure will be given to Department of Economic Affairs in FY22.

Government announced, “For start ups, we are allowing 1% companies to grow without any restriction on their paid up capital.

The finance minister proposed to revise definition under Companies Act, 2013 for small companies by increasing their threshold for capitalization.

The Government plans to allot Rs 20,000 Crore for bank recapitalization of PSBs.

The Government is set to introduce a Development Financial Institution (DFI). Rs 20,000 Crore will be provided to capitalize the new DFI, with an aim to have a lending portfolio of Rs 5 lakh crore in 3 years.

Finance Minister announced Rs 1,10,055 Crore outlay for railways. Out of this Rs 1.07 lakh Crore is for capital expenditure for FY22.

It is also announced that more metro and urban buses on PPP model and 20,000 buses planned in cities.

Finance Minister said, “Metrolite and Metroneo technologies will be deployed in Tier-2 cities and along the periphery of Tier-1 cities.”

It is announced that the eastern and western dedicated freight corridors will be commissioned by June 2022.

100% electrification of broad-gauge routes will be completed by December 2023.

The Government announced that agricultural infrastructure funds will be made available to APMCs for augmenting their infra facilities.

“Cotton farmers saw stupendous increase in the amount that was paid to them in 2013-14, that was Rs 90 Crore and it was increased to over 25,000 Crore in 2020-21.” Government announced that 1,000 more mandis would be integrated into the E-NAM market place.

Agri Infrastructure and Development Cess on a number of items including fuel and liquor was announced today but the finance minister also said there would be no additional burden on the consumer overall.

Government has propose to review more than 400 old exemptions to customs duty, and from October 1 will put in place a revised customs duty structure free of any distortion.

Government plans on reducing customs duty uniformly to 7.5% on products of non-alloy, alloy and stainless steel, exempting duty on steel scrap till March 2022.

To provide relief to copper recyclers, the government will be reducing duty on copper scrap from 5% to 2.5%.

The government has raised basic customs duty on import of sub-parts of mobile phones and battery chargers from nil to 2.5% in FY21-22. The price impact will be known once the details are clear.

India will set up seven textile parks over three years under the scheme of mega investment textile parks, which was announced in Budget FY22.

The parks to be setup over 1,000 acres of land with world class infrastructure, and plug-and-play facilities, will be addition to the Rs 10,683 Crore production linked incentive (PLI) scheme for technical textiles and manmade fibers.

The government announced the free cooking gas LPG scheme; Ujjwala will be extended to one crore more beneficiaries.

City gas distribution network of providing CNG to automobiles and piped cooking gas to households will be expanded to 100 more districts.

69 crore beneficiaries (86% beneficiaries) were covered under the One-Nation, One-Ration card implemented by 32 states and union territories.

The Government proposed doubling of MSME allocation, setting aside Rs 15,700 Crore for medium and small enterprises in FY22.

The government plans to allow incorporation of one-person companies with no restriction on paid-up capital and turnover.

Non-resident Indians will also be allowed to incorporate one-person companies in India.

India to launch Deep Ocean Mission, with allocation of Rs 4,000 Crore over next four years.

Government to extend eligibility of erstwhile tax sop on home loan up to FY22.

The FM proposed extension of tax holiday for start-ups by one more year, a tax exemption for relocating funds to IFSC, and tax holiday for aircraft leasing business in Gift city.

FDI in insurance was increased to 74%.

Finance Minister said, “FDI in insurance raised from 49% to 74%. Key management to be resident Indians.”

The government announced the Urban Swach Bharat Mission with outlay of Rs 1,41,678 Crore over 5 years.

The Government has announced Rs 2,217 crore for 42 urban Centers with a million plus population in this Budget.

Sitharaman said, “We are separately announcing a voluntary vehicle scrapping vehicles to phase out old and unfit vehicles.”

She said “Vehicles will undergo fitness tests after 20 years for passenger vehicles, 15 years for commercial vehicles.”

Government has announced that a Jal Jivan Mission will be launched across all urban local bodies.