Centre for Monitoring of Indian Economy (CMIE) has informed that India’s unemployment rate has been risen again October from 6.86% a month ago to 7.75%.

A 146 basis points fall in unemployment rate in September to 6.86% over August saw an estimated 8.5 million increase in employment. In total, employment in September was 406.2 million, the highest since Covid-19 shook the country in March 2020. However, the number was still lower than the pre-Covid employment of 408.9 million in 2019-20.

The increase in the unemployment rate in October has followed CMIE’s expectations. In an article last month, CMIE’s MD and CEO Mahesh Vyas wrote, “India is now at the cusp of the festive season and expectations are that the coming months could boost employment in general and retail trade in particular. Given the large size of the retail trade industry, an increase in employment in this can be expected to have a significant impact on overall employment.” 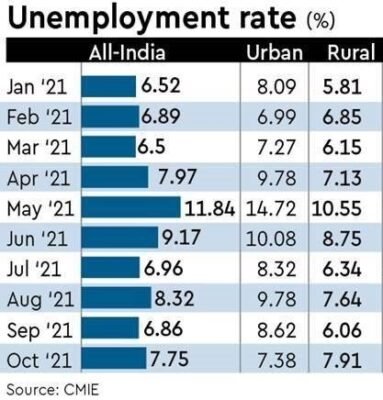 Notices Served to E-Commerce Sellers for Violation of Rules