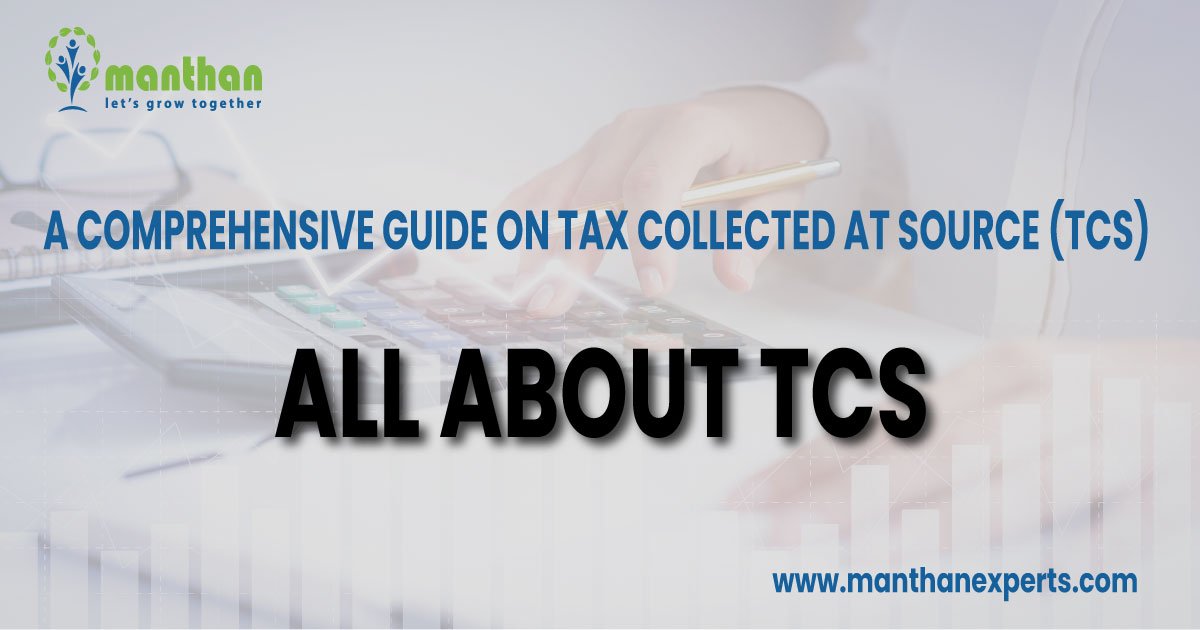 Tax Collected at Source (TCS) is a system introduced by the government which works on the concept that where a person selling specific goods is liable to collect tax from a buyer at a prescribed rate and deposits the same with the Government.

TCS is an extra amount collected as tax by a seller of specified goods from the buyer at the time of sale, which is over and above the sale amount and it is remitted to the government account.

The next takeaway point to learn in TCS is its Applicability and according to the section 206C of the Income Tax Act, 1961, TCS shall apply on the following goods at the following rates –

Who are Collector, Collectee, and Licensee / Lessee?

The person who collects the tax at the time of sale of goods as per provisions of section 206C of the Income-tax Act, 1961 is called Collector.

The person who buys goods as per provisions of section 206C of the Income-tax Act, 1961 is called Collectee.

Section 205Cof the Income Tax Act, 1961 states that every person who grants a lease or a license of any parking lot or toll plaza or mines or quarries to any other person then such person shall be called as Licensee / Lessee.

Who is the buyer under Tax Collected at Source (TCS)?

1. Public Sector Company.
2. Central/State Government.
3. Embassy, a High Commission, legation, consulate, and the trade representation of a foreign state.
4. A Club.
5. A buyer in the retail sale of such goods purchased for personal consumption.

The Buyer means a person who buys the specified goods mentioned in this sub-section. But it does not include:

1. The Central Government, a State Government and an embassy, a High Commission, legation, commission, consulate and the trade representation of a foreign State.
2. A local authority.
3. A public sector company, which is engage in the business of carrying passengers.

If we learn the definition of the buyer according to S.206C(1H) then it refers to any who buys any goods. Thus, it will not include the following persons under the domain of buyer –

1. The Central Government, a State Government and an embassy, a High Commission, legation, commission, consulate and the trade representation of a foreign State.
2. A local authority.

3. A person importing goods into India.

Who is the seller under Tax Collected at Source (TCS)?

The next definition is of the seller and according to this provision, a seller consists of the undermentioned persons –

According to the newly inserted provision that is S.205C (1H) of the Act, a seller refers to a person whose aggregate turnover exceeds the amount of Rs. 10 crores of the immediately preceding financial year during which the goods were sold.

What are the consequences if the Buyer/remitter does not provide PAN or Aadhaar no. to the seller?

It is a mandatory requirement for a buyer to provide a PAN or Aadhar No. to the seller under the provision of S. 206CC of the IT Act so in case he fails to provide the same then the TCS rate shall become higher. Thus it shall become –

What is TAN and How to apply for TAN?

The procedure for the application of TAN is very simple and can be done online by filling up Form 49B.

What is the due date for depositing the TCS to the government?

* In this case form 24G is submitted.

How to deposit TCS?

The Tax Collected at Source has to be deposited by using Challan ITNS-281 on the government portal.

How to file TCS returns?

The filing of TCS return is mandatory for all the persons who have collected TCS.
TCS return is filed in Form No. 27EQ in electronic form.

What are the due dates of filing TCS returns?

31st March 15th May of immediate next financial Year

The Collector issues Form 27D to the Collectee after filing the TCS return in Form-27EQ, which is known as TCS Certificate. Due date of issuing Form 27D is as under: –

When TCS can be exempted?

The next interesting point in TCS is to know when TCS can be exempted. Hence, Tax collection at source (TCS) shall be exempted in the given cases-

When the goods are exempted from TCS liability then the seller has to file Form 27C.

TCS under Good and Services Tax

Under GST, TCS is applicable to the traders selling goods online.
The online platform will provide the payment after deducting the tax amount of 1% under the IGST Act, which includes 0.5% in CGST and 0.5% in SGST.

Read in detail about TCS under Good and Services Tax

What are the Consequences of non-collection / non-deposit or delay in the collection/depositing of TCS?

A Collector will face the consequences if he fails to collect TCS or after collecting the same fails to deposit to the credit of the Central Government’s account or fails to file TCS returns on time, which are as under: –

If a Collector does not collect TCS or after collecting fails to pay it to the Government, he shall be liable to pay simple interest at the rate of 1% per month or part thereof on the amount of TCS from the date on which such tax was collectible to the date on which the tax was actually paid.

TCS is a legal liability thus the failure shall lead to legal consequences. Therefore, if a Collector fails to collect the TCS then he shall be liable to penalty under section 271CA. It is a penalty in the form of a fine which shall be equal to the amount of TCS that the collector failed to collect.

Suppose the collector has collected the TCS but has failed to deposit the same to the Central Government then in such cases also collector has to face the legal consequences in the form of imprisonment. Hence, the collector shall be punishable with rigorous imprisonment for a term which shall not be less than three months but which may extend to seven years and with fine.

Fees for late filing of Return of Tax Collected at Source –

If the seller gets late for filing the TCS return then he shall be liable to pay the late fees under section 234E of the IT Act, 1961 at Rs 200/- per day subject to the maximum amount of TCS until the return is filed.

Penalty for late filing of Return of Tax Collected at Source –