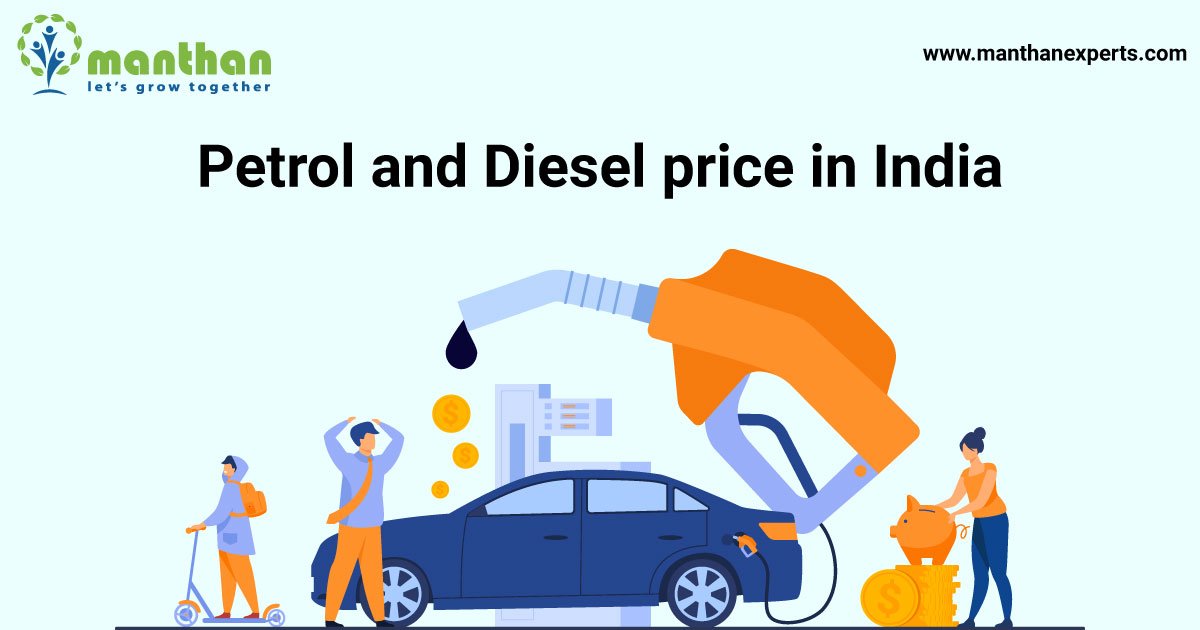 India is one of the biggest oil consumers in the world. It is having an important impact on the growth of the country’s economy & GDP. It contributes at least 15% of GDP. In India price of Petrol & Diesel are determined on the basis of recently introduced Dynamic Fuel Pricing System. In this article, we will discuss in brief about the mechanism and factors that determine Petrol & Diesel price in India.

Petrol and Diesel Price in India

Price Mechanism deals with buyers & sellers who mediate prices of goods or services depending upon Demand & Supply. It refers to the broad variety of ways to match up buyers & sellers according to the price distribution. However, the case of Petrol & Diesel price in Delhi, India is somehow different. There is no competition between various marketing companies & the price that consumers pay has little to do with the actual production cost.

India in the recent scenario is sadly among the top 10 Countries with highest petroleum prices. We have recently seen public up roaring regarding the heavy rise in the Petrol Diesel prices Delhi. This rise in prices is associated with the factors apart from the cost of production. The reason behind such Petrol and Diesel price in Delhi is mainly based on the factors such as Government Taxation Policies, low refinery consumption ratio, dollar exchange rates etc.

The prices of petrol/diesel are rising continuously with no limit in sight. In few states, petrol has crossed 100 rupees per liter mark. The factors or reasons behind the increase in petrol diesel price in Delhi are as follows

Change in the prices of International Crude Oil directly impacts the price of crude oil in Domestic market. This is the important factor responsible for any change in petrol and diesel price in India. Brent Crude Oil price in the international market has gone high as $68 per barrel. The rate of Crude is highest in the last 13 months. The reason behind the increase in brent crude oil is due to America, which is the biggest producers of Crude Oil, facing problem with the supply due to unfavorable climatic condition.

The Crude which is imported is sent for further process to the refineries. Low refinery ratio will lead to less quantity of fuel available for sale, thus the cost of petrol/diesel increases.

The Rupees-Dollar Exchange rate also affects the price of petrol/diesel in India. Indian Oil Company’s imports oil from other countries & pay in terms of Dollars ($), but their expenses are in rupees. Thus, when the rupee rate falls the Oil companies have to pay more for the USD.

The Crude is having huge impact on Trade Deficits, as more than one third (approx. 40%) of India’s total export earnings goes in buying crude oil. This is a worrying aspect, as the major share of country’s foreign exchange reserves is spent on import of a single commodity i.e., Crude Oil. It not only increases the margin of trade deficit but also decreases the value of rupees in terms of US dollars, which increases the rate of Crude oil.

Transportation is one of the important factors in retail fuel pricing. Petrol/Diesel transported to longer distance far from the depots will be priced higher in comparison to the places nearer to the oil companies’ storage area.

Hence, there will be no relief in prices of petrol/diesel from the International market as there is increase in demand of crude oil by many countries & the reduced supply of crude from the OPEC (Organization of the Petroleum Exporting Countries) which supplies 40% of Crude to the world. Relief will only be possible when State & Central Government decides to cut tax rates in the domestic market.

Rapid increase in Petrol and Diesel Price in India makes it necessary for every Individual to understand how the price of Petrol/Diesel is calculated.

Petrol/Diesel are the commodities, which are kept out from the GST Regime. The Petrol/Diesel retail-selling price in India is based upon the rate of Crude Oil, OMC’s margin (Oil Marketing Companies), Transportation Cost, Freight cost, Central & State Government taxes, excise duty & other taxes.

Price break-up of Petrol in Delhi-

Price break-up of Diesel in Delhi-

Thus, nearly 60% (Petrol) & 55% (Diesel) of the prices paid on Delhi Fuel pump was due to taxes levied by State & Central Government.

Why there are so many variations in the prices of Petrol/Diesel across the Country?

Last week in few states, the prices of Petrol have already crossed Rs 100 mark. The difference is also seen in between major metropolitan cities, such as the variation between the Petrol and Diesel price in Delhi & Mumbai. The reason behind such variation is because Petrol & Diesel attracts uniform rate of Central Excise but VAT differ from State to State.

In Rajasthan, Road Development Cess is also added along with the VAT. Similarly in Maharashtra & Madhya Pradesh, 1% Cess along with an additional VAT is added to the cost of Petrol/Diesel.

Whereas, there are few states where the prices of Petrol/Diesel are lower because of reduced VAT by the government.

According to the latest data released by Indian Oil Corporation Limited, Andhra Pradesh & Assam are having the lowest petrol and diesel price in India.

Here is the list of above-mentioned states fuel prices-

Petrol & Diesel are outside the ambit of GST & the general view is that by getting Petrol/Diesel under the new Indirect tax regime can significantly reduces the price. Bringing Petrol/Diesel under the GST will lead to a sharp fall in current prices. According to the information provided on the Indian Oil websites, Customers are paying more taxes than the base price of petrol/diesel. The highest slab under the existing GST rate is of 28%. Even if petrol/diesel is taxed under GST at the highest rate, then the post-tax price will be much lower than what it is currently. Hence, by bringing petrol/diesel under the ambit of GST government can reduce the burden on the middle-class.

GSTR 2A VS GSTR 2B – A Detailed Analysis

Is Cryptocurrency the future of currency?