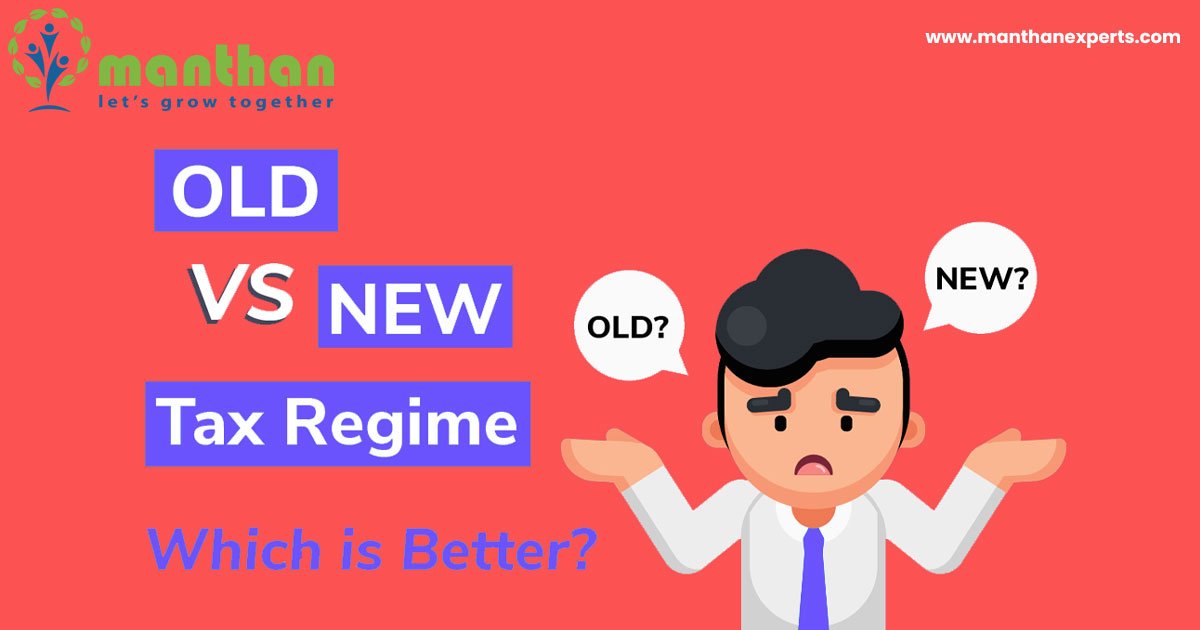 In Budget 2020, Finance minister Nirmala Sitharaman, announced a new tax regime for Income tax payers. This new tax regime is introduced mainly to simplify taxes in India as it reduces tax rates of various income slabs as well as it has removed rebates and exemptions.

However, old tax regime wherein taxpayer gets various rebates & exemptions, is still available for taxpayer. It means that taxpayers has to choose between the new regime, where the rates are lower but there are no exemptions or deduction are available and old regime, where exemptions and rebates can be claimed and applicable tax as per the income slab will be levied.

In New Tax Regime, there are 6 tax slabs, as follows:

In this tax regime no exemption and deduction under any section of Income tax Act, 1961 is allowed.

Note: – A few exemptions are still allowable in new tax regime for some time, as these are indispensable.

In Old Tax Regime, there are 3 tax slabs, as follows.

In this tax regime exemption and deduction under various sections of Income tax Act, 1961 is allowed.

*Rebate Available in both new and old tax regime, i.e. No Income Tax, If Gross total Income is below Rs 5 Lakh

The government is not at all forcing this ‘New tax Regime’ on any taxpayer of the Country but giving option to taxpayers that they can decide where they want to save their money.

Apart from being simplicity, another benefit of New Tax Regime is that taxpayer doesn’t have to rush for tax-saving schemes and insurances or park their money in avenues, which they otherwise won’t invest, just to save tax. So we can say that those looking for exemptions can continue with the old system and those looking for a simplified process and reduced rate can adopt the new tax regime.

Even though the new rates are profitable, the old tax regime might be beneficial for some taxpayers, while it may not help others.

Before choosing between New and Old tax Regime, one should know which exemptions and deductions is allowed and which have been removed under new tax regime?

Exemptions mean that particular amount of certain income on which tax is not payable.

Deductions mean a particular amount, which is reduced from taxpayer’s total taxable income.

Major Exemptions and deductions not allowed under the new tax regime

The following are the deductions and exemptions are not allowable under the new tax regime:

Major Exemptions and deductions available under the new regime

The following are the deductions and exemptions, which are allowable under the new tax regime also:

Now comes the question for taxpayer – How to decide which regime is beneficial for him?

Old vs. New: A Comparison For Different Slabs

In Old Tax Regime, Taxpayers with annual income between Rs. 5 lakhs to Rs. 10 lakhs are taxed at 20%, under the old regime.

In the New Tax Regime, Taxpayers with annual income between Rs. 5 lakhs to Rs. 7.5 lakhs will be taxed at half that rate i.e. 10%.

However, if the taxpayer is benefiting from exemptions and his net tax payable is less, in that case he should choose to continue with the old tax regime.

Let’s understand the same with the help of example,

From the above table, one thing is very clear that if the taxpayer is not having any savings for which he can get any exemptions / deduction in that case new tax regime is always better for him. In other case i.e. if taxpayer invests for taking certain exemptions / deduction in that case it is advisable to compare the tax liability under new tax regime with tax liability under old tax regime and choose which one is beneficial for him.

If a taxpayer owns a property, which is self, occupied and pays interest on its loan, in that case deduction up to Rs 2 lakh is not allowable under new tax regime and it cannot be set off against salary income.

If such property is let-out, in that case taxpayer can claim deduction for interest paid on the housing loan. However, the new tax regime restricts the deduction to the taxable rent received from the property and there cannot be any set-off of the losses arising from ‘income under the head house property’

Deductions for certain business expenditure not allowed under the new regime

There are certain deductions and exemptions, which are not allowed for business income under new tax regime, which are as follows:

Both systems have their own merit and demerit. The new tax system is comparatively simple but in old tax system there are many exemptions / deductions available, which gives people habit to invest in tax saving schemes.

Seek Assistance for any Query