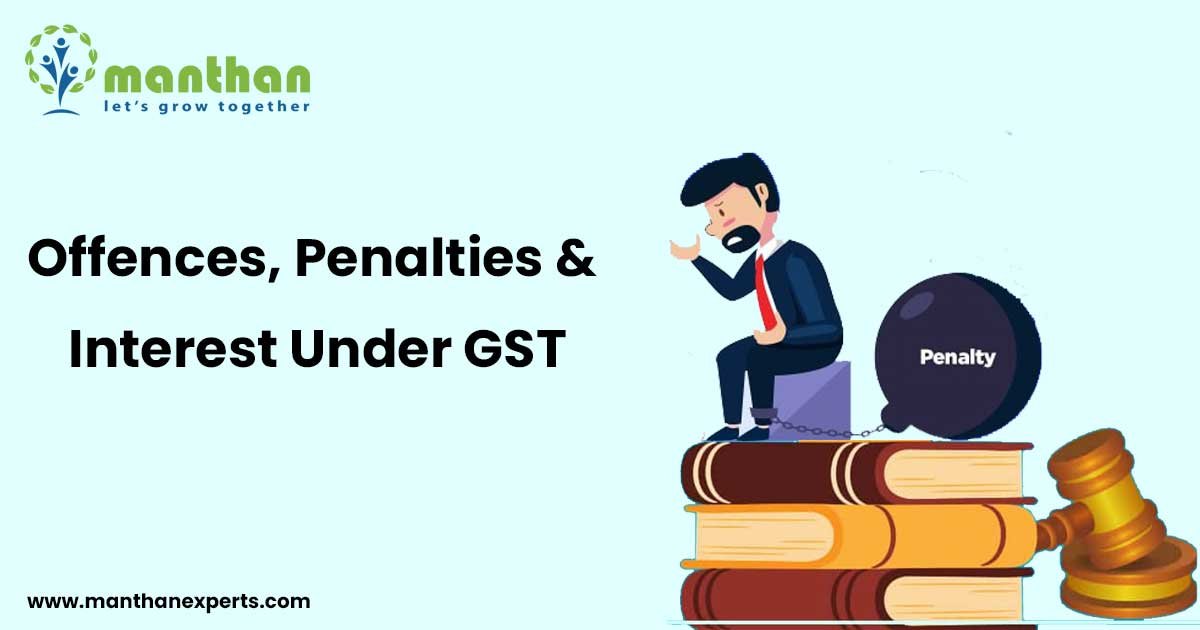 What are Offences under GST?

Offences under GST is a breach of the provisions of GST Act & GST Rules. It is an illegal Act & if the taxpayer is charged with an offence that means taxpayer has been accused of doing something against the law.

What are the offences committed under GST?

Offences under GST committed by taxpayer’s are-

How many Penalties & Interest are there under GST Law?

Common Offences and their GST Penalties and Interest are as follows-

Is there any Imprisonment for committing High Value Fraud under GST Law?

GST has Corporal Punishments i.e. Imprisonment (Jail) for the person committing offenses (Mentioned above) or High Value Frauds which are as follows-

What are the Punishments for destroying Evidence?

If an Assessee Destroys evidence, disallows the Proper officer from his duty, manipulate the information or helping someone in the same, then an Assessee shall be liable up to 6 months imprisonment with Fine.

What are the Punishments for Repeated offences?

If an Assessee repeats the offence for the second time, then the punishment can extends up to 5 Years with fine. An Assessee cannot be prosecuted without the prior sanction of the Commissioner.

How offences can be Compounded under GST Law ?

It is a short cut method to avoid legal actions. The accused Assessee has to appear before the Magistrate at every hearing through an advocate in case of prosecution for an offence in a criminal court. But the court proceedings are time consuming & expensive as well. Thus, in compounding, the accused Assessee is not required to appear personally and can be discharged by paying compounding fees, which cannot be more than the maximum fine leviable under the relevant provisions.

What is the amount payable for Compounding?

The minimum amount payable for Compounding of offences shall be

The maximum amount payable for compounding of offences shall be

When compounding of Offences will not be available under GST Law?

Compounding of Offences will not be available for-

When someone can be arrested under GST?

If the Commissioner of GST believes that an Assessee has committed an offence under Section 132, the accused assessee can be arrested by any authorized GST officer.

What are the offences under Section 132 where arrest provisions become applicable?

What are the powers directed by government to the CBIC against the defaulters?

The government has directed the powers to the senior officials of the Central Board of Indirect Taxes and Customs (CBIC) to go strong against the defaulters. Many GST-registered businesses fails to file their returns in due time, so the new set of norms allows GST authorities to either attach their properties or freeze their bank accounts, if the entities do not file their tax returns despite of repeated reminders.

Although the provisions of Seizure and Arrest seem rather harsh as GST is an Economic legislation, i.e., a tax law and not a Criminal legislation. The Commissioner has the power to Arrest or Seize on the basis of reasons to believe.

From reading the above blog, we already know that there are various kinds of penalties & interest payable on defaults made by assessee. To avoid such Penalties & Interest payable on defaults, it is better to make compliance of business as per GST Law. For better & timely compliance of such provisions it is always advisable to take help of experts. If you require any assistance for GST Compliance or in handling notices of penalties issued by GST Department, contact your trustworthy advisors Manthan Experts at info@manthanexperts.com