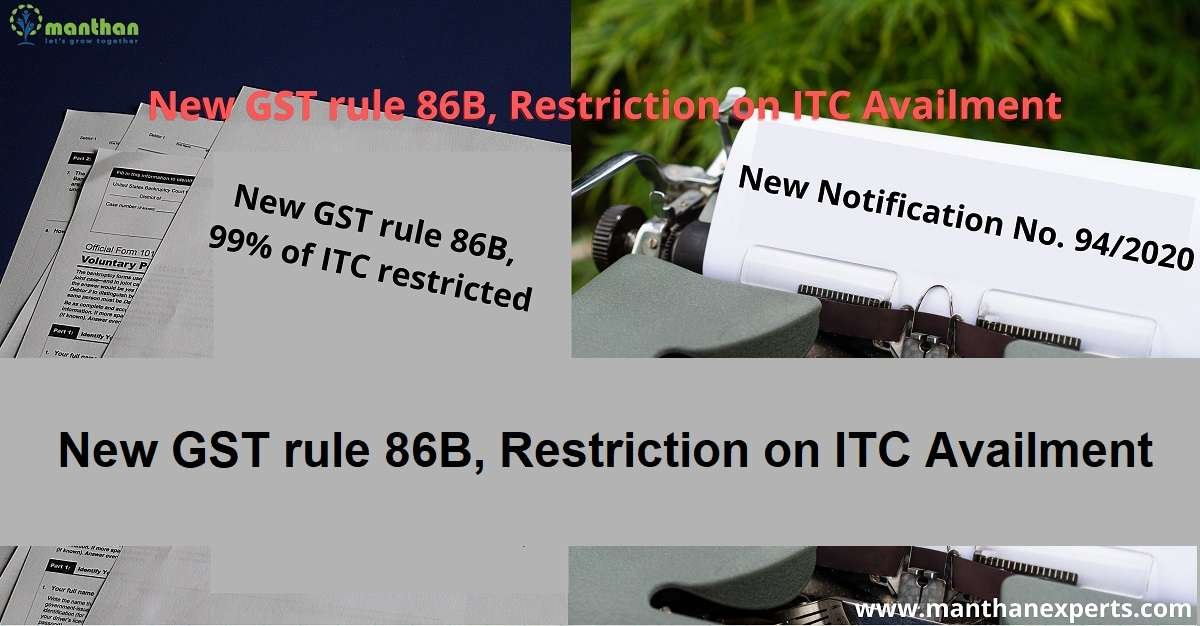 Availing ITC as per rule 86B

As per New Notification Number, 94/2020-Central Tax, dated 22nd December 2020, GST rule 86B has been made in the CGST Rules, 2017 which has imposed 99% restrictions on Input Tax Credit (ITC) available in electronic credit ledger of Registered Person. This means 1% of Total Output liability is to be paid in cash, where the value of taxable supply other than exempted supply and zero-rated supply in a month exceeds Rs. 50 lakh.

ITC Claim in respect of invoices not provided by the corresponding vendors has now been restricted to 5% of the Input Tax credit (ITC) available in GSTR 2A. This limit earlier was 10% of ITC available. Any claim exceeding the prescribed limit shall result in violation of CGST Act read with rules which may result into suspension of GSTIN. The provision shall come into effect from 1st January 2021.

Cases where applicant does not do Aadhaar verification or where department feels to carry out physical verification, then the time limit shall be 30 days instead of 7 days.

More powers to department for cancellation of GSTIN

The officer can take actions for cancellation of GSTIN where ITC availed by the taxpayer exceeds the limit as prescribed in section 16 of CGST Act, 2017. Clause (e) in Rule 21 of CGST Rules, 2017 has been inserted.

GST Registration of taxpayer’s can be cancelled without being heard

If in GSTR 3B, the liability declared is less than that declared in GSTR 1 in any particular month, then department may now take actions with cancellation of GSTIN. Some practical difficulties might be there in implementing such provisions as several number of corrections are made in GSTR 3B which may result in lower tax liability as compared with GSTR 1. The new clause (f) is inserted which shows details of outward supply to understand that Taxable value and tax both shall coincide between GSTR 1 and GSTR 3B.

If there is alteration between details of outward supply of GSTR 3B and GSTR1 or details of inward supplies between GSTR 3B and GSTR 2B which indicates violation of Act. So, GST department shall now provide a notice in FORM GST REG 31 to have explanation as to why GSTIN should not be cancelled. Taxpayer shall be required to submit the reply within 30 days of such notice being provided to him.

No refund u/s 54 of CGST Act 2017 can be availed by the taxpayer if GSTIN is suspended. This means before applying refund GSTIN Suspension proceedings have to be closed.

Earlier distance covered up to 100 km per day was permitted under e-way bill provision. Now the same has been increased up to 200 km per day

In case of any query, seek assistance from the Team of Manthan Experts for immediate assistance.