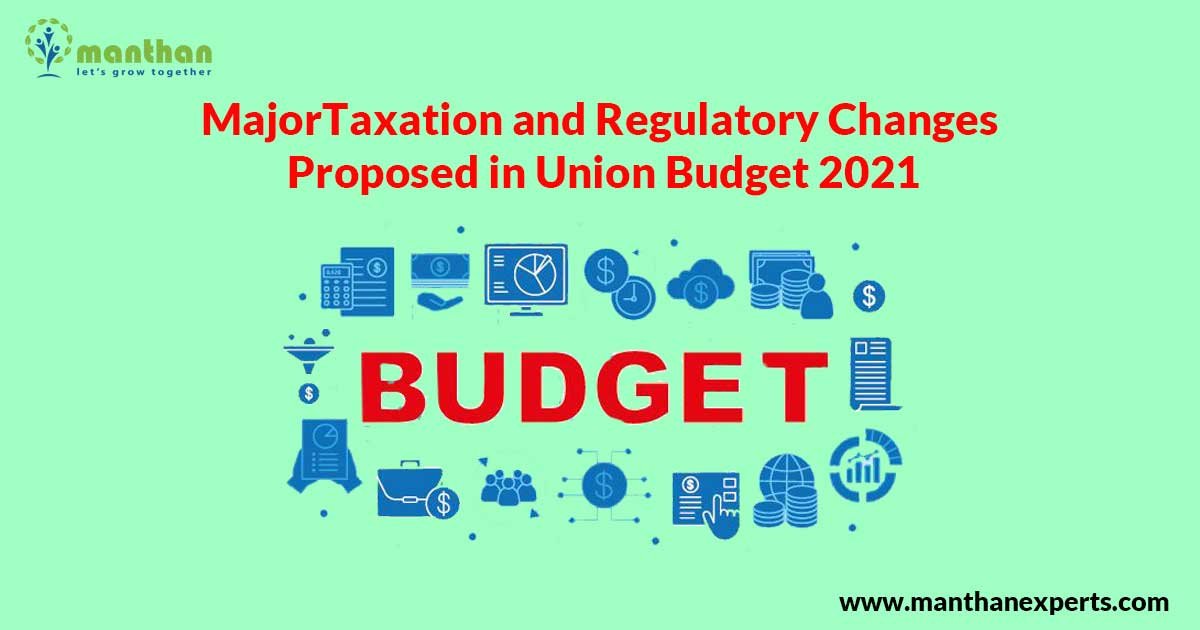 In this article we will read in brief about tax and regulatory changes announced by Finance Minister Nirmala Sitharaman in Union Budget 2021.

The government plans to allow incorporation of one-person companies with no restriction on paid-up capital and turnover.

Non-resident Indians will also be allowed to incorporate one-person companies in India.

An Entrepreneur willing to start Start-up in the form of one-person company then this relaxation by the government regarding existing paid up capital and turnover thresholds would definitely help such start-ups.

Paid-up capital in one-person companies will now be allowed up to Rs 2 crore, while turnover limit has been increased till Rs 20 crore.

Government has announced to extend the tax holiday for startups till March 31, 2022.

Finance Act, 2020, introduced the concept of faceless assessment and appeals under the Income Tax Act.

Now in Union Budget 2021, the government has proposed a step ahead i.e. faceless proceedings before the Income Tax Appellate Tribunal.

Government has proposed to reduce compliance burden on assessee who are of above the age of 75 years.

Assessee who is above 75 years and gets only pension and earn interest from deposits need not to file IT Returns.

Presently an assessment can be reopened for six years.

In union Budget 2021, it is proposed to reduce such time limit of 6 years to 3 years.

However, in serious tax evasion cases, when the concealment of income is more than Rs 50 lakh per year, such cases can be opened for up to 10 years.

In Finance Act, 2020, the threshold limit for tax audit for a person carrying on business is increased from Rs. 1 crore to Rs. 5 crore.

This limit is applicable only in those cases where aggregate of all receipts and payments in cash during the previous year does not exceed 5% of such receipts/payments.

In order to incentivize non-cash transactions to promote digital economy and to further reduce compliance burden of small and medium enterprises, it is proposed to increase the threshold from Rs. 5 crore to Rs. 10 crore in above mentioned cases.

In Budget 2021, it is proposed that higher TDS/TCS would be imposed on taxpayers who default in filing their tax returns

Any person deducting tax at source will have to deduct tax at the highest of the following rates while making payments to a defaulter:

As we know that Goodwill is company’s intangible asset, which is depreciable as it offers value for a brand name.

Citing a Supreme Court ruling, the government has announced that no depreciation will be provided on goodwill of a business or profession in any situation.

The government has proposed an amendment in the Income Tax Act to specify that:

Block of depreciable assets won’t include goodwill of a business or profession.

In case where it was already included in the block of depreciable assets, the tax department will specify a method for calculating capital gains arising out of its transfer.

In Budget 2021, a provision has been introduced to remove the tax exemption on income from investments in provident funds, relatable to investments exceeding Rs 2.5 lakh a year.

Apart from this it is also said in budget 2021 that the government has noticed that some employers deduct contributions from employees salaries towards provident fund, but do not remit them in time.

In Budget it is proposed that late deposit of contributions will not be allowed as deductions to employers.

The stamp duty value can be up to 120%, which was earlier 110% of the consideration if the transfer of “residential unit”, which means an independent housing unit, is made between 12th November 2020 and 30th June 2021.

Till now Section 44ADA of the IT Act, is applicable to all the assessee being residents in India.

In Union Budget 2021, it is proposed that this section would be applicable only to the resident individual, Hindu Undivided Family (HUF) or a partnership firm, other than LLP.

Omission of Section 35(5) of CGST Act so as to remove the mandatory requirement of GST Audit of annual accounts.

Union Budget 2021 has impacted each and every individual. We hope this article would have cleared all the queries related to Union Budget 2021 and in case of further queries you can immediately contact the Experts Team of Manthan Experts for immediate assistance.