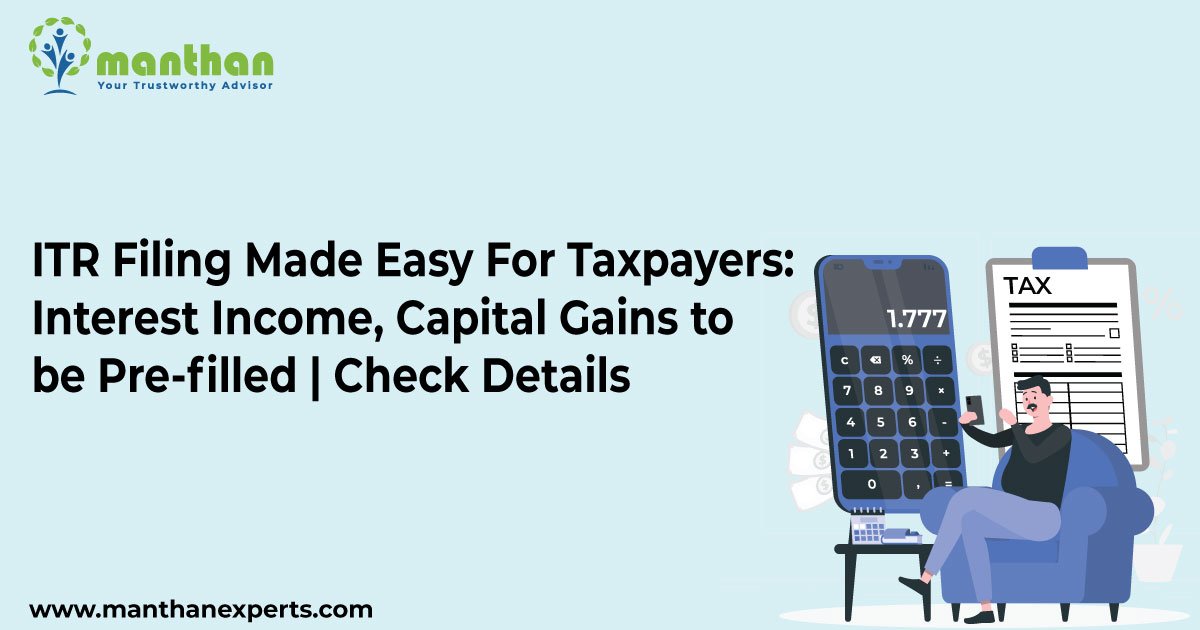 The Indian Government has taken various steps and reforms to make the direct taxation system more easy and transparent. One of such reforms is Pre-Filled Income Tax Returns Forms which has made the direct tax compliances much easier and convenient for Income Tax filers.

As of now, pre-filled information in ITR forms contain details of general information like Name, Address, PAN, Salary Income, TDS, Tax Payments if any, etc. to ease the filing of returns. However, the ITR filers must confirm before submitting in ITR.

In recent speech of Union Budget 2021 – 22, the Finance Minister announced that the pre-filled ITR forms will have more pre-filled information from this financial year.

As we have already discussed that previously, the pre-filled Income Tax Returns Forms were filled with the following details –

From the ITR Forms for Financial Year 2021-22, it will come filled with more details as mentioned below –

It has been common practice of many taxpayers that in order to save tax, they don’t disclose small incomes such as dividend, interest income on savings or investments or capital gain on securities or mutual funds, as the income tax authorities do not have access to information regarding such income.

Therefore, in order to minimize tax evasion, the government has introduced the concept of including such income in prefilled ITR forms.

Now the question arises, how the Income Tax authorities would get such information regarding income of assesses to pre fill the ITRs.

For this, one of the step taken by government is that it has mandated for all the Companies whether listed or unlisted to report about the total dividend declared in a financial year. Such report will disclose tax-payer wise dividend details. So, the dividend details of respective taxpayer will be auto-filled in their respective ITR Form. Nonetheless, these entities must confirm before submitting in ITR.

Likewise, The Banks, Post offices or Non-Banking Financial Companies shall also submit taxpayers-wise details of interest paid to the government.

Since, the government will collect information regarding TDS, Dividend income etc. from different places, there is high probability that there would be wrong information in prefilled ITRs of some assesses.

This is one of the major concern of assesses regarding prefilled ITRs as if only income tax department would be allowed to correct the information then the filing of ITR will become more complex instead of easy. It is requested to all the ITR filers about pre-filled ITRs that please confirm before submitting in ITR.

The government should provide a proper mechanism that how the Income Tax Authorities will deal if ITR forms are filled with wrong information due to pre-filled details.

Conclusively, it is true that pre-filled ITR Forms will encourage the taxpayers to disclose accurate income as IT Department would already have the details of many incomes like dividend income, interest income, capital gain etc. Since the government would have many information regarding income of assesses, it would also encourage many people to file their returns of income. It is said to all the ITR filers that please confirm before submitting in ITR.

If you are looking for Professionals’ help for filing ITR forms accurately then Manthan Experts Team of CAs will help you not only in filing correct ITR but also in saving tax legally.

Can a taxpayer claim both HRA and Home loan tax benefits?