Finance Minister Nirmala Sitharaman on Tuesday urged IT developer Infosys and its co-founder Nandan Nilekani to ensure that the new income tax e-filing portal doesn’t “let down taxpayers in the quality of service being provided.”

New Portal was initially launched on 07th June 2021 and crashed in few minutes, after that login issues, non-availability of previous records, slow processing etc. issues were faced by the users.

Later on, Infosys co-founder Nandan Nilekani responds to FM through a tweet saying that they have observed some technical issues and working to resolve them. Infosys regrets these initial glitches and expects the system to stabilise during the week,
he further added. 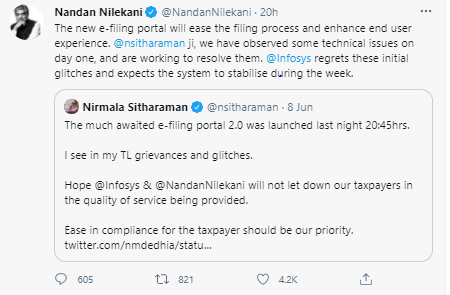 DSC to be re-registered on new Income Tax portal