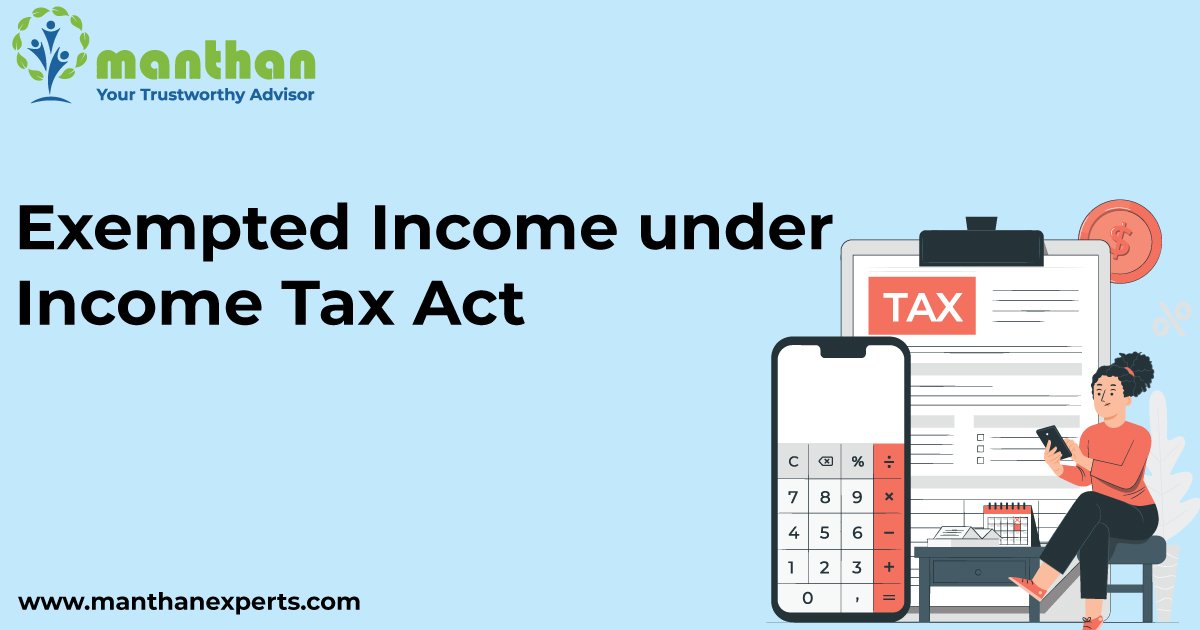 It is generally believed that the person who earns more has to pay more tax but it is not absolutely true in real life. Payment of tax depends upon the type of income one has earned. If the total income of person includes more of exempted income, less the tax would be payable. In short we can say that there are lots of type of income prescribed under the Income tax Act, 1961, which are exempt from tax.In this blog we will discuss about certain tax exempted income.

Now, the first question that arises in mind could be, what is Exempt income????

An income earned which is not subject to income tax is called Exempt Income.

Since, exempt income is exempted from tax therefore, it is not included to the total taxable income of the person while calculating tax liability.

Section 10 of the Income tax Act, 1961 prescribes income, which do not form part of total income.

Let’s discuss the few of well-known type of exempted income as under: –

Self-Employed Agriculture Income – Section 10(1) of the IT Act

As we all know India is an Agricultural Economy. To boost this sector, government has exempted income generated through agriculture from tax liability. However, agriculture income has to be declared in the Income Tax Return. It is to be noted that Income earned through poultry and cattle rearing is also included in agriculture income.

If any individual receives any amount from HUF (Hindu Undivided Family) or has inherited money from HUF then such income shall be exempted from Tax Under Section 10(2) of the IT Act. Any amount received either out of income or from family estate is also exempt from tax.

According to Section 10(2A) of the Income Tax Act, 1961, any person who is a partner in any partnership firm is not liable to pay tax on the income received in the form of share of profits from such firm. It is free from tax in order to avoid the double taxation, as this income is taxable in the hands of partnership firm. Although, if the partner receives any income other than the share of profits such as remuneration or interest then it shall be taxable in the hands of such partner.

According to Section 10(7) of the IT Act, any person who is resident of India and renders service out of India for which he receives any perquisites or allowances by the government then such amount received shall be tax exempted from tax.

Voluntary Retirement – Section 10(10C) of the IT Act

When a specified category of employees receives any amount under the voluntary retirement scheme, such amount is exempted from tax under section 10(10C) of the Income Tax Act.

Maximum exemption under section 10(10C) is lower of below: –

Income Received as Awards and Scholarships

Any person who has received any type of award or scholarship for education then such amount shall be exempted from tax. There is no cap on the maximum limit on this income.

Till FY 2017-18, capital gains on sale of shares and securities which were held for more than 12 months and STT was paid were totally exempt under section 10(38) of IT Act.

Is it mandatory to Declare Exempt Income in ITR?

As we already know that certain types of income are exempt from tax, but it doesn’t mean that person who has earned such exempt income is free from disclosing the same in his tax return.

As not disclosing the exempt income in the ITR would make it difficult for a person to explain the source of a particular income in future. So, every person who earns exempt income must declare the same in his return of income of respective year.

Paying Income Tax and filing Income Tax Return is both moral and legal obligation of every Indian Citizen. Many people consider it as financial burden thus the government has allowed certain exemptions and deductions under the Income Tax Act. Conclusively, we can say that Indian direct Taxation system is flexible in nature.

Whether to file NIL ITR or not?