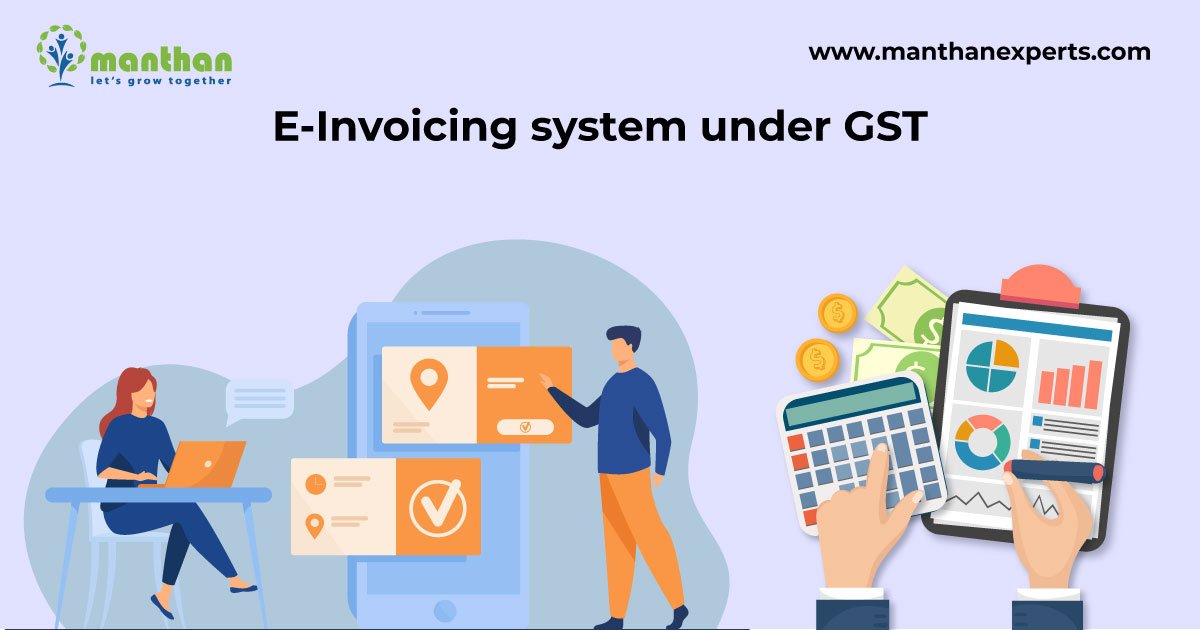 E-Invoice stands for the Electronic Invoice, which can be alternatively called a digital invoice. A digital invoice can be viewed and processed digitally. It contains data from the supplier in a structured format that the buyer’s financial system can automatically recognize, without requiring manual data input from the administrator.

GST e-invoice is generated at the government GST portal and data for the generation of e-invoice in respect of the goods and services are provided by the business organizations.

What is the E-Invoicing system under GST?

Under the ‘E-invoicing’ system a specific class of person (As of now business having turnover more than 50 Crore)** have to prepare an invoice. They will upload specified particulars of the invoice on the Invoice Registration Portal (IRP) and will obtain an Invoice Reference Number (IRN).

The invoice copy containing such IRN issued by the supplier to the buyer is known as ‘E-Invoice’ under GST.

‘E-invoicing’ is a system in which B2B invoices are authenticated electronically by GSTN for further use on the common GST portal. All invoice information will be transferred from this portal to both the GST portal and the e-way bill portal in real-time. Consequently, it will eliminate the need for manual data entry while filing GSTR-1 return as well as generation of part – A of the E-way bills.

Who are applicable for GST E-Invoicing System?

Further, from January 1, 2021, E-Invoicing was applicable to businesses having a turnover of more than Rs. 100 Crore for B2B transactions.

**Now, Government stated in a notification on March 8, 2021, that GST E-Invoicing will become mandatory for businesses having a turnover of more than Rs. 50 Crore from April 1, 2021, for Business to Business transactions.

Who are exempted from GST E-Invoice System?

The government has launched the GST E-Invoicing trial version. It will provide multiple categories under which the taxpayer will fill the same as per the applicable criteria.

What is the role of IRP (Invoice Registration Portal) Under GST E-invoicing?

The IRP under GST is a portal that allots IRN and QR codes to each invoice. The same will help in authenticating the e-invoices generated at the portal.

Currently, NIC (National Informatics Centre) is the only available portal for this.

As per this e-invoicing system, only an “E-Invoice” having approved Invoice Reference Number (IRN) is a valid invoice.

What are the documents required for reporting in IRP?

The list of documents which are require to be upload for reporting the e-invoice to IRP is as under:

What is the process of generating GST E-Invoice?

GST e-invoice will be generated in the same way as the e-way bill is generated at portal https://ewaybill.nic.in/

Note: The IRN would be the “unique identity” of the E-invoice for the one complete financial year.

What are the Benefits of the GST E-Invoicing system?

Major benefits of GST E-Invoicing System are as under:

What would be major challenges in following the E-Invoice system under GST for a businessman?

Major challenges of GST E-Invoicing System are as under:

Is it possible to amend or cancel E-Invoice?

Amendment of E-Invoice – Yes it is possible to amend the e-invoice and all the amendments would be done only at the GST portal. However, JSON sent for the generation of e-invoice & IRN cannot be amended.

Though one has an option for manual cancellation on the GST portal before the filing of the returns but E-invoice cannot be partially canceled. Moreover, it cannot be canceled if a valid e-waybill exists for that IRN as goods are in movement.

GST e-invoice, a new concept under GST, which is introduced after multiple levels of discussions and feedback sessions on a trial run.

“If GST was a path-breaking reform, e-invoicing is set to overhaul how India does business. E-Invoicing is not just a migration from paper to e-invoices that are authenticated and digitally stamped through a government portal. E-invoicing will transform the relationship between a business and its suppliers, its customers, and also with the tax administration.

So, it won’t be incorrect to say that with e-invoicing, doing business has to be reimagined. Several challenges may lie ahead, but the potential benefits from this far outweigh the costs.

How to File GST Return Online in India?