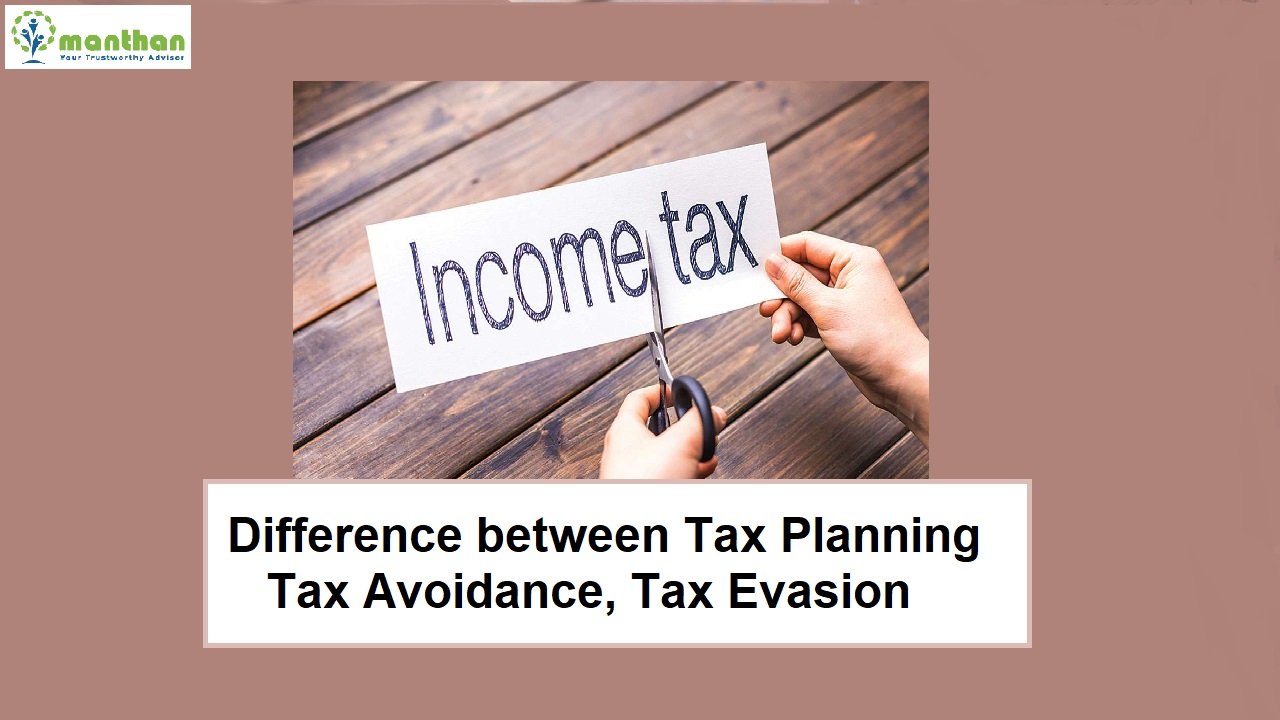 Every taxpayer always look for difference between tax evasion and tax avoidance as these both terms look similar but can either save taxpayer from tax liability or can impose heavy tax penalties.

According to Article 265 of the Constitution of India, tax can only be levied and collected by the authority of law. Collection of tax is the major source of revenue for every country’s government. Government uses this fund for the welfare of the general public at large.

In India, government majorly collects two types of taxes i.e. Direct Tax and Indirect Tax. In this blog we will only be discussing about Direct Taxes.

This blog specifically deals with the Legality of Tax Planning, Tax Avoidance and Tax Evasion under the Income Tax Act, 1961 and the difference between tax evasion and tax avoidance.

These terms are correlated to each other but all of these can save a person from legal consequences.

Tax Planning is the key process by which taxpayers can analyse their financial position in a respective financial year to estimate how much tax they will have to pay and how they can reduce the tax liability in a legal manner. Tax planning majorly involves the deep analysis of available exemptions and deductions.

Generally, a taxpayer does not have detailed understanding of taxation provisions thus they are always advised to seek assistance from experts for tax planning. For example, taxpayers can plan saving investments in PPF Accounts to save tax.

Tax planning is considered as an art, which involves logical planning of financial transactions in order to get all the benefits of tax provisions, which an assesses can avail within the framework of taxation law. This is why, it is very important to learn difference between tax planning and tax evasion.

As the name defines, Tax Avoidance is a legally accepted method to reduce the tax liability by structuring the transactions to avail the largest tax benefits. For example, investment of funds into schemes eligible for tax deductions and tax exemptions. This is why tax avoidance is absolutely legal and extremely wise.

Though, tax avoidance is a legal method but tax authorities do not suggest the same, as it will lead to saving or reduction in tax.

One must be very careful while doing tax planning, thus one must be thorough with the difference between tax planning and tax avoidance.

On the other hand, the Income Tax Act strictly prohibits Tax Evasion, as it is a deceitful method to reduce or absolve the tax liability. For example, Concealment of Income amounts to tax evasion and thus is illegal. Tax Evasion is absolutely illegal and is considered as crime.

One must be very careful while doing tax planning, thus one must be thorough with the difference between tax planning and tax evasion.

There is a very thin line difference between tax evasion and tax avoidance thus the taxpayer has to be very diligent and careful while tax planning so that he does not go too far from the legal line of tax avoidance.

It is observed that many taxpayers fail to keep adequate records of business transactions that occurred in a financial year with intent to defraud the tax department. Moreover, taxpayers manipulate with the total sales and receipts and thus show less income as compared to actual income earned in that financial year.

Many businesses show excess value of assets whose actual value is fixed and cannot be increased so that they can claim more depreciation, which will reduce the total business gain.

Many taxpayers keep different sets of books of accounts to hide the real profits earned by a business and to evade the tax.

Sometimes, taxpayers claim false deductions or claim overstated deductions for the expenses they have either not made or have spent less amount. For example, Rs. 5,000 has been paid to wife for work but such amount has not been paid in actual.

There are certain expenses which an assesses makes for personal use such as car or computers but he records such expenses for business use in the books of accounts.

Sham Transaction is a method to record the transfer of property in the books of accounts only and no such transfer has been made in actual. The main object to record such transfer is the tax evasion.

Now we know that, tax payer can reduce his tax liability via 3 method i.e. Tax Planning, Tax avoidance and Tax evasion. Out of which, Tax planning and Tax avoidance are permissible whereas Tax evasion is not permissible as it manipulates the law which would be illegal thing to do. So, be a smart taxpayer and always try to do tax planning with the help of Experts. If you require any assistance in tax planning, feel free to contact Manthan Experts by just dialling +91 9643-969-969.

TAXABILITY OF GIFTS IN INDIA

Income under the head Business & Profession