From 1st October, the cheque books of Oriental Bank of Commerce (OBC) and the United Bank of India will be discontinued, as announced by Punjab National Bank (PNB) in an official tweet posted on 8th September, 2021.

Further, the customers have been requested to replace their old cheque books as soon as possible in order to avoid future inconvenience when using their cheque books.

The tweet further added that the account holders can apply for the new cheque books via the local bank branch. Alternatively, customers can also make the changes via the respective banks’ automated teller machines (ATMs), via internet banking, PNB One or through the official call centre.

The changes come in light of the merger that took place, which saw both the Oriental Bank of Commerce and the United Bank of India merge with Punjab National Bank in April of 2020. 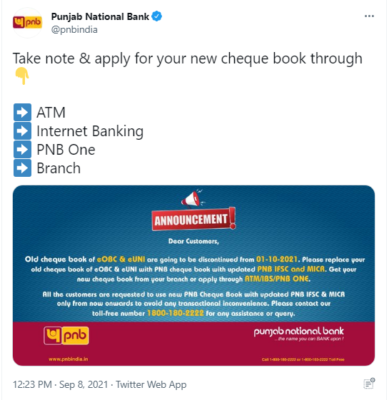